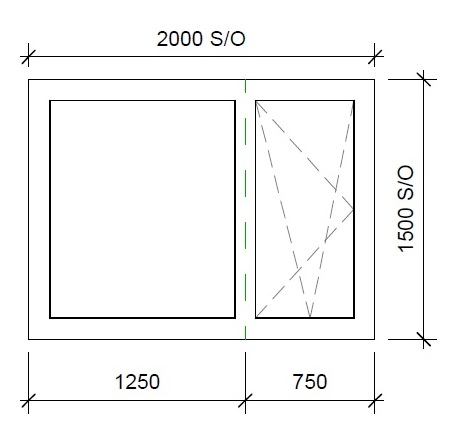 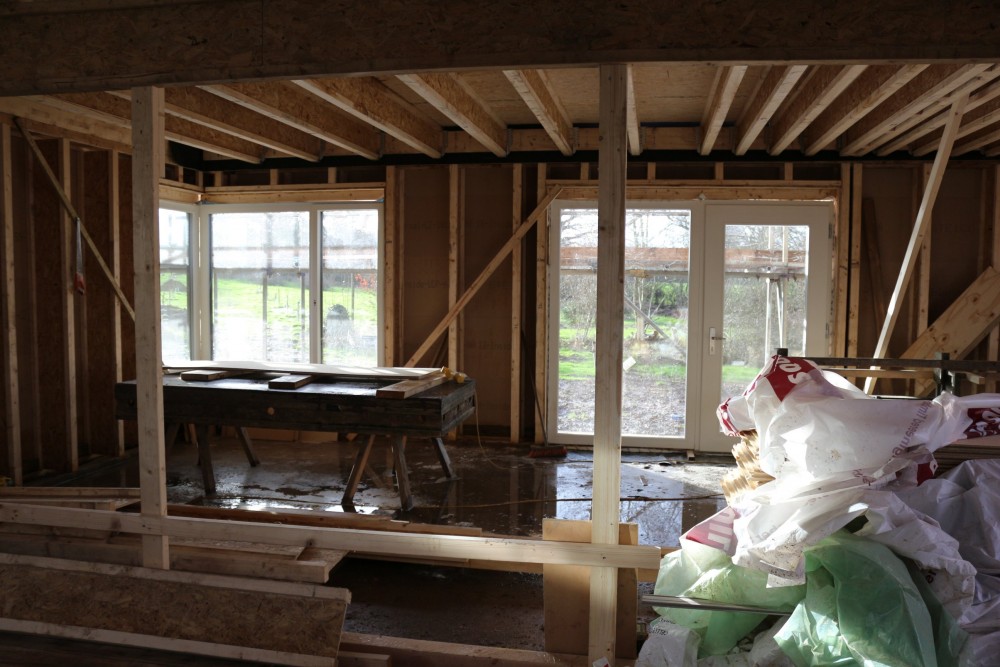 The biggest visual changes this week have been to Mike’s study, which now has a first layer of wall, a ceiling and three sets of windows. 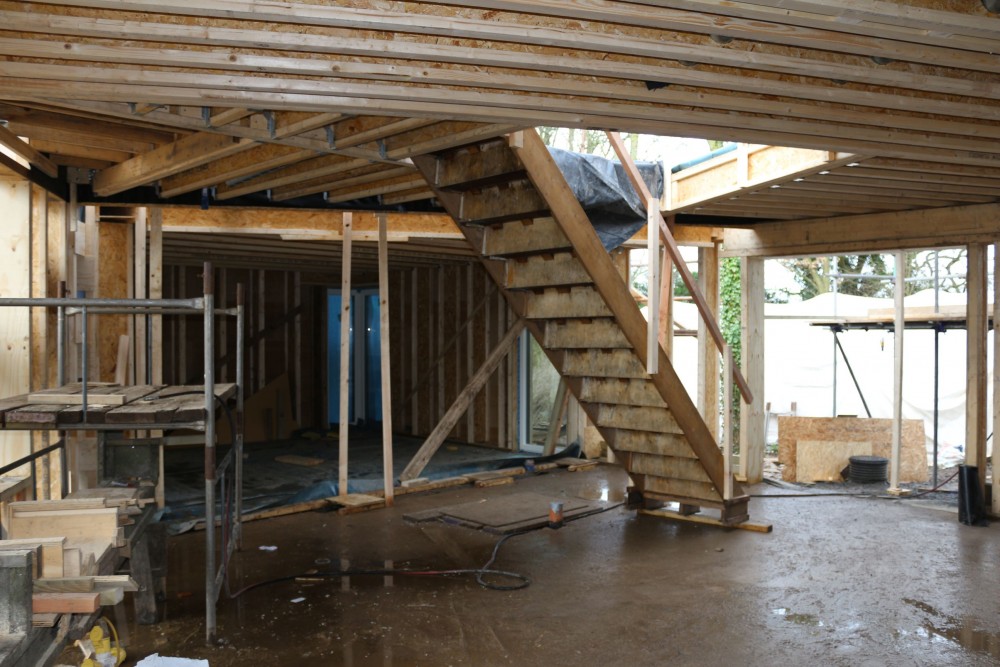 The dark space behind the temporary staircase is the study and you can just see one of the corner windows and the front window. The next photo shows the house from the front drive with the study window on the right. The front door will be where the big gap is on the left of the photo.

Having the staircase means that both us and the cat now have easy access on to the first floor, where you can get a feel of the two interlocking cubes that make up the house. Other jobs have continued around the rest of the house with flooring now covering all the first floor joists and the start of fixing the slates around the base of the house. The wood cladding will not reach the ground in order to prevent rotting, but will overlap these slates.

This week the frame has been working its way round the rest of the ground floor. If you look at the house plans you can see that the house is the intersection of two cubes, which makes for a tricky wall where the two cubes intersect. This is particularly true where the west wall of the first floor does not have a ground floor wall below. The first photo shows the beam running from north to south which will support the west first floor wall.

The next photo shows the frame for Mike’s pod with the west wall beam jutting out on the left to form one side of the triangular overhang of the porch.Not only has the outside ground floor frame be finished, but two-thirds of the first floor has been laid. This photo show the ventilation ducting threaded through the joists under the floor.

The I_beams have also been used horizontally to produce the base for Mike’s study which is cantilevered off some concrete piles. It is covered in plastic in the previous photo.And so what is an I-beam. It is a mixture of OSB board and wood in an I-shape. Here is a close-up of one.

The last few days have seen the scaffolding go up, which has given us our first indication of the height of the new house. The top boards are just below the roof at its low end on the left and a metre below at the high end.


Despite “Grand Designs” habitually having problems of windows arriving late, ours have arrived before the start of the build. However, as it was discovered that they were being transported on a large artic with no crane, they have been offloaded in Pershore and will stay there over Christmas awaiting a smaller lorry with a suitable crane.

Wednesday was the day for concreting the foundations, so it was all hands on site as it had to be smoothed out before it started to set.

From start to finish it took a couple of hours, but speeded up it only takes 16 seconds.

And Mike has been try out his helicopter flying for an aerial view of the site.

The photo shows the pale pink slot-together polystyrene system which provides the insulation around and below the concrete foundations for the main part of the house. 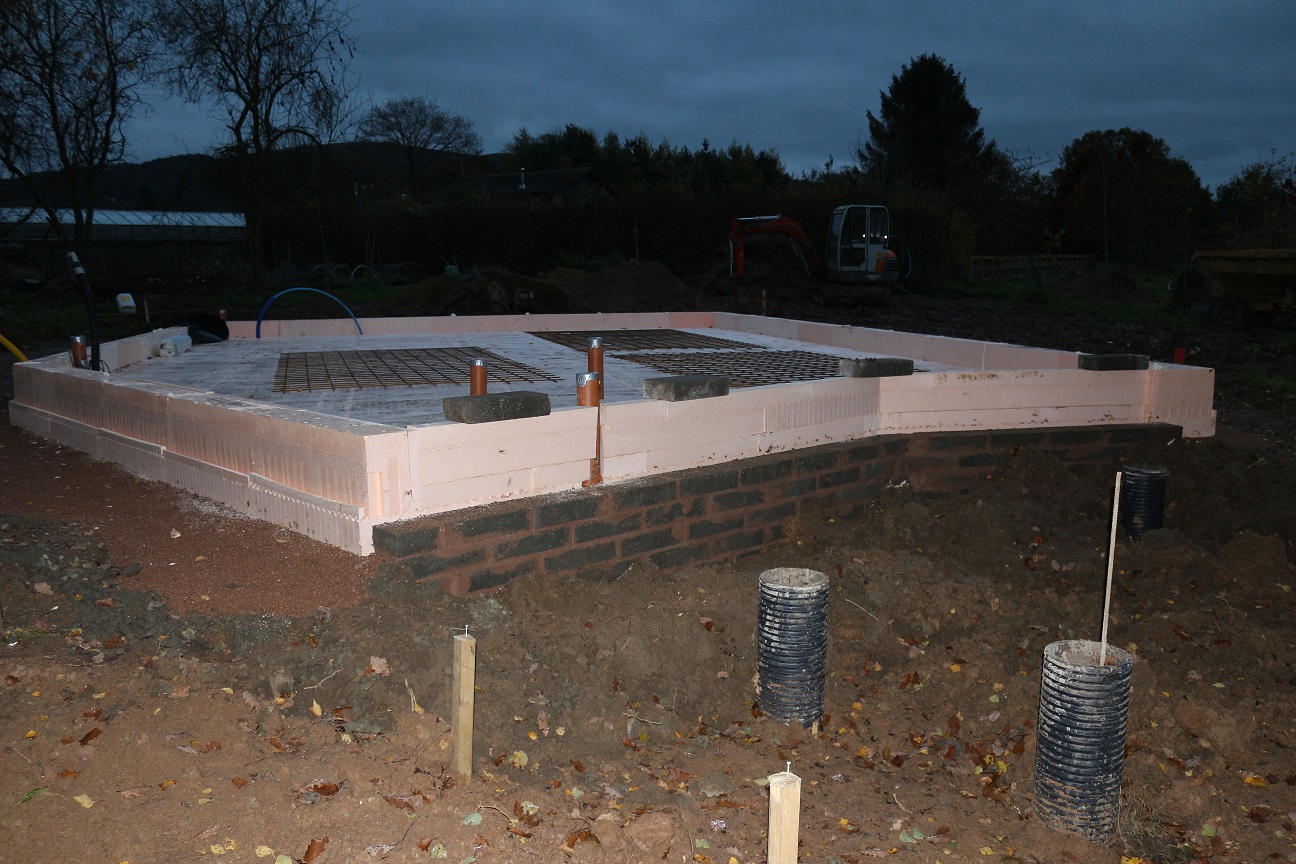 So we are now ready for pouring the concrete next week.

Here is a video of the polystyrene going down:

For a change this week, there has been movement out of the ground instead of holes being dug and filled in. These are the pillars which will hold up the cantilevered floor of Mike’s study.

More trenches being dug this week – water to one corner of the field and electricity to the other.


Only one small surprise when the existing electricity turned out to be not where the plans from the electricity company said it was.

Another two weeks of digging holes and filling them in. 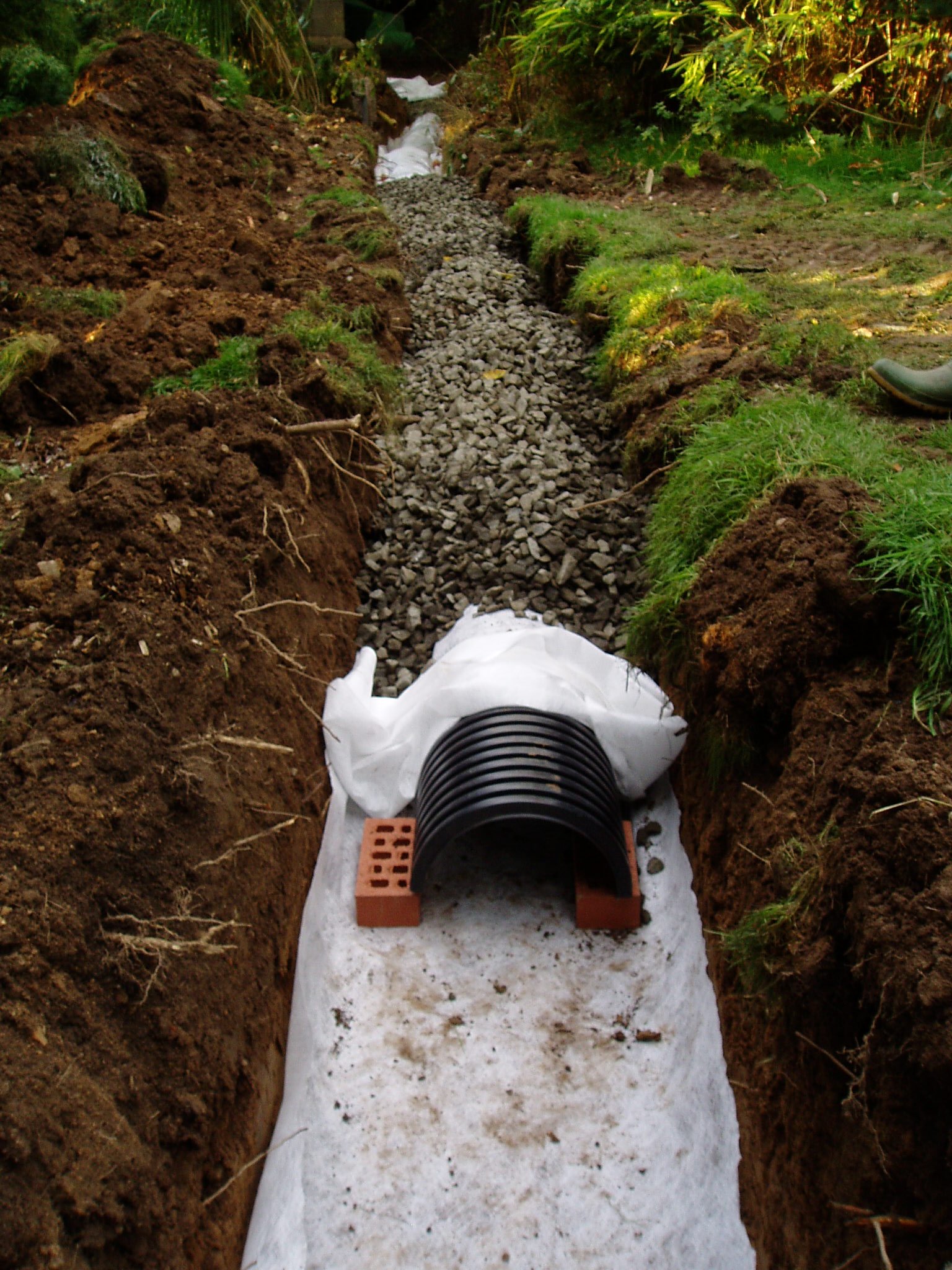 This is a photo of part of the one of the two 25m long septic tank spreaders which wander into the wood. All now covered up and hopefully will silently work over the next few decades.

And now we start to see the shape of the new house for the first time. 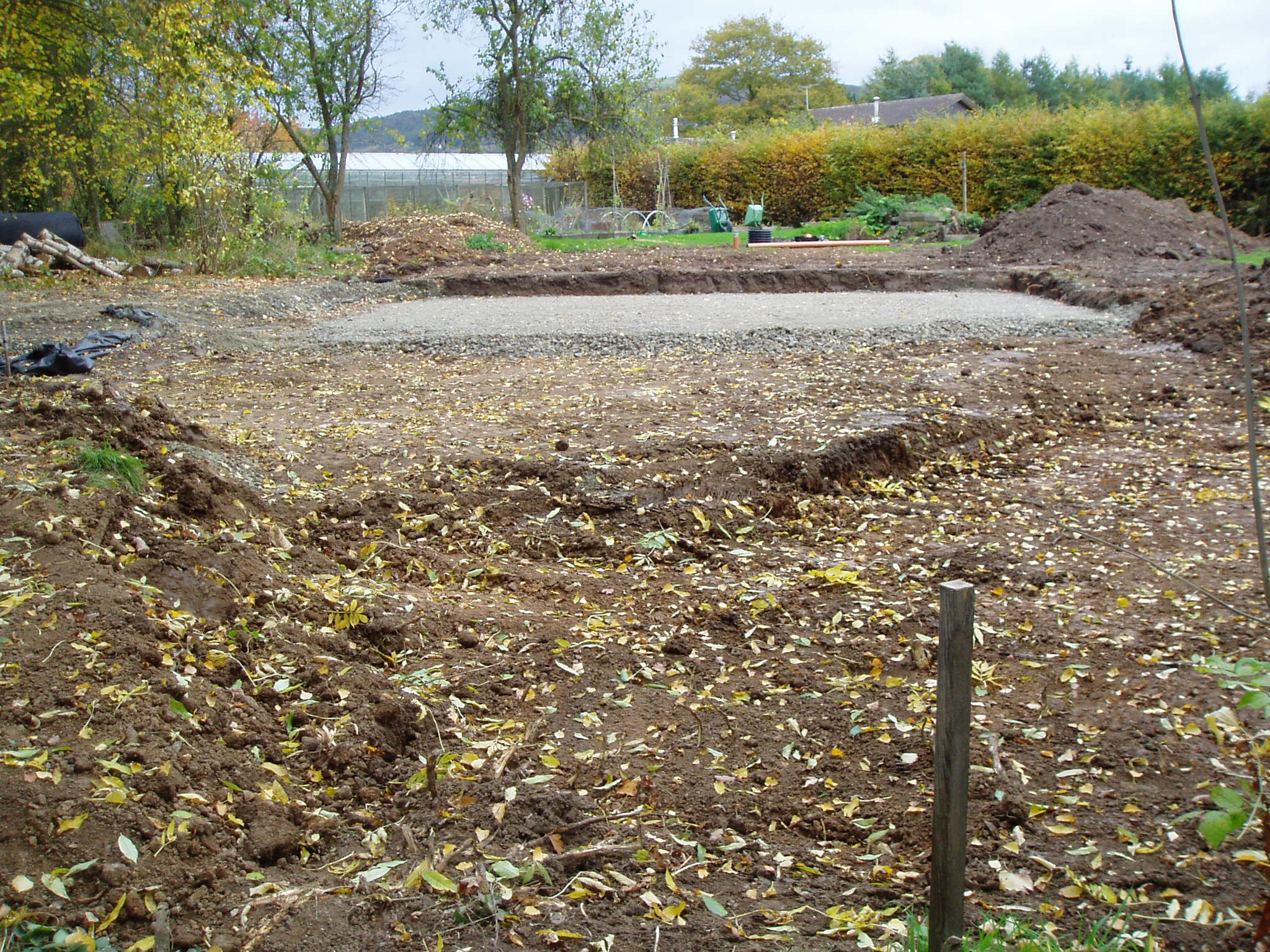 The photo is taken from the corner of Mike’s “pod” looking through the shower room to the kitchen and living room.